People have been fascinated by the sky above their heads since early days. The ancients used to search for meanings in the night sky. They studied the positions and movements of stars and planets to predict events, and amazingly, these predictions often came true.

Be it a science or a bit of magic, astrology appeared back in the 2nd millenium BCE and is still here to fascinate us. Across the most developed ancient cultures, astrology dominated any other systems of knowledge. It was flourishing in the Hindu, Chinese, Maya, and Arab cultures, ancient Egypt, Greece and Rome.

Egyptian astrology is especially interesting, and, by the way, it has some obvious similarities to modern astrology. Interested? Let’s dive in: in this guide, we’ll walk you through the milestones of ancient Egyptian astrology and tell you about the Egyptiam zodiac signs.

At the dawn of Egyptian astrology, temple priests accurately monitored and recorded the movement of stars and planets and tried to understand their effect on the earth’s environmental changes. They predicted famines and floods based on solar movements. The arched ceilings of the ancient Egyptian temples were designed to imitate the heavens, and all the rituals were scheduled based on planetary activity.

During the Ptolemaic dynasty, the last ancient Egyptian dynasty whose rule lasted from 305 to 30 BC, Egyptians borrowed the Greek zodiac designation system and assigned Egyptian gods to each zodiac sign.

The ancient Egyptian calendar was close to the calendar we use today: like the Gregorian calendar, it was a solar calendar. However, the year had 365 days and consisted of three seasons of 120 days each. The seasons were divided into four months of 30 days. You might have already calculated that that’s not enough for a 365-day year, and you’re absolutely right. To make up for the remaining five days, ancient Egyptians added a 5-day month which was treated as outside of the year. The twelve months were usually numbered within each season but were sometimes named by their principal festivals. 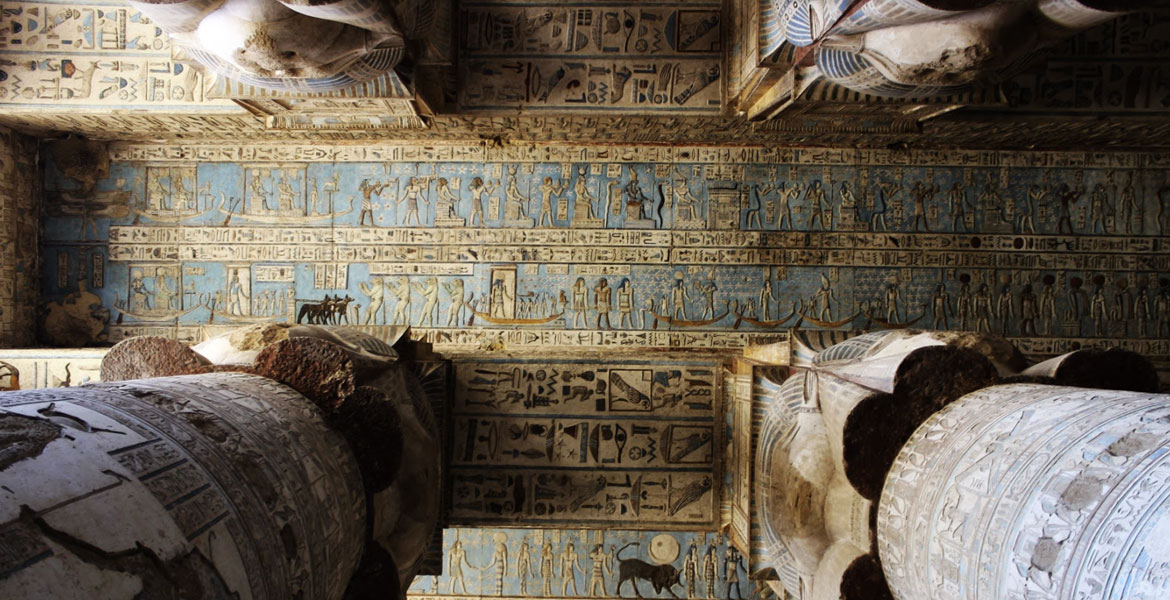 Also, each month was split into three 10-day periods known as decans, the last two days of each decade being days off for the royal craftsmen. Such a division was strongly connected with the Egyptian astrology: there were 36 decans in the year, based on the 36 asterisms that rose every 24 hours.

Early Egyptians made attempts to elaborate a system of what we now know as clock times. They divided the day into temporal hours, each of them having a different length throughout the year, depending on the season. Therefore, a typical summer hour was longer than one in winter, as it depended on the period of daylight. Later on, Egyptians established a 24-hour day, and they were the first people to do that. Early Egyptians used a range of tools to measure the time, such as shadow and water clocks.

Like western zodiac, Egyptian zodiac consists of 12 signs. However, Egyptian astrology assigns certain days of the month to each sign. As it was previously mentioned, ancient Egyptians named their zodiac signs after their gods and goddesses, except for the Nile. The character of the god or goddess was believed to determine the character of a person born under a certain sign. Let’s take a closer look at the Egyptian astrology signs. 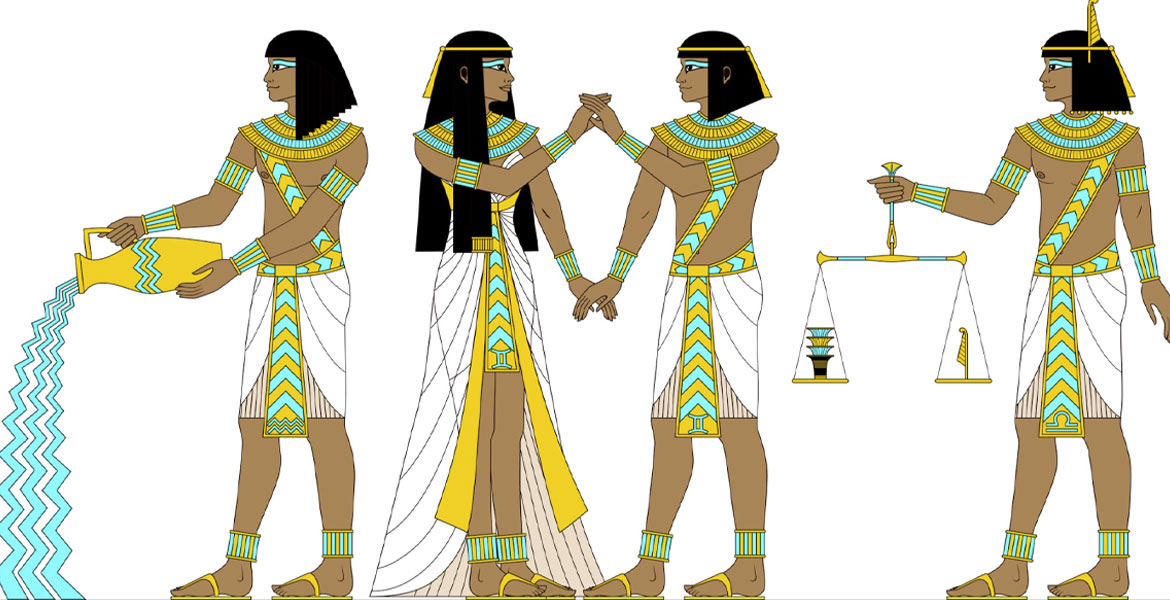 Ancient Egyptians named their first zodiac sign after the Nile, their lifeblood. This is the only sign that does not represent a deity. Early Egyptians believed that people born under this sign are logical, peaceful, and practical. They don’t like arguments and do everything to keep peace around them. Although they are sometimes influenced by their passions, they still are as wise as they are passionate. They are strong observers which helps them develop intuition.

Amun-Ra is the second Egyptian zodiac sign. According to ancient Egyptian astrology, Amon-Ra is the king of the gods, one of the most powerful Egyptian astrological symbols. Those who were born under this sign, are confident, polite, and optimistic. They make efficient leaders and are good at keeping everything under control as well as making smart decisions.

In Egyptian astrology, the third zodiac sign is Mut, the mother of the world, the female deity responsible for protecting mankind. Those who were born under this sign are sensitive, affectionate, loyal and generous. These people are usually very focused and goal-oriented. They are very protective of others and tend to be loving parents.

The fourth sign in Egyptian astrology is Geb, the Egyptian god of the earth. The ancient Egyptians believed that his laughter started earthquakes. The Geb people are faithful, open and sensitive. Sometimes they seem to be too emotional, however, this only attracts other people. They are very reliable friends. Although they tend to be shy, they can be pretty persistent if necessary.

In Egyptian astrology, the fifth zodiac sign is Osiris, named after the god of the underworld and resurrection. People born under this powerful sign are strong, intelligent, vulnerable and independent. They usually become strong leaders. There are very few obstacles that can stop the Osiris people from reaching their goals. Sometimes they may be aggressive and selfish, however, they always say what they mean.

The sixth Egyptian zodiac sign is Isis. Isis is the goddess of nature. People born under this zodiac sign are honest and straightforward. They are sociable and romantic, and possess an excellent sense of humor. The Isis people have all necessary personality traits to work well in a team.

Thoth is the seventh Egyptian astrology sign that got its name from the god of learning and wisdom. According to the Egyptian horoscope, people born under this sign are romantic, wise, energetic, and courageous. They are in constant search for ways to improve. The Thoth people enjoy learning and are very inventive.

One of the most powerful zodiac signs, Horus is the god of the sky. The Horus people are courageous, ambitious and optimistic. They make practical and wise leaders who motivate and inspire. People born under the sign of Horus are hardworking and get on well with others.

In Egyptian astrology, the ninth sign belongs to Anubis, god of mummification and guardian of the underworld. People born under this zodiac sign are confident and curious. The Anubis people are very hardworking and creative, however, they work best when they are alone as they have introverted personalities.

The tenth sign of the Egyptian zodiac is Seth. Seth is the god of chaos and violence. Those with Seth as their Egyptian astrological sign are perfectionist and bold. They seek challenge, are great at communicating with people, and love to be the center of attention.

One of the female zodiac signs, Bastet is the deity of cats, fertility and pleasure. The Bastet people always look for balance and avoid conflict. They are charming, affectionate and sensitive personalities who can always rely on their unmistakable intuition. They are loyal and devoted partners.

Finally, meet Sekhmet, the twelfth sign of the Egyptian zodiac. Sekhmet is the goddess of war. Those born under this sign have two sides to their personalities: they are disciplined on the one side, while they are free and easy-going on the other side. These people are perfectionists and have a good sense of justice.