Interesting Facts About the Sun

Many-many years ago, in the immense universe with trillions of galaxies, life appeared on Earth. But without the Sun’s light and heat, it wouldn’t be possible. The Sun warms the ocean, determines the weather, and gives energy to green plants that provide food and oxygen for life on Earth. Not to mention, the Sun’s gravity helps to keep the planets in a steady orbit around the Sun. Without it, the planets would fall out of place.

It’s not surprising that many ancient civilizations including Aztecs, Incas, Egyptians and Japanese centred their culture around the Sun. But do you know much about our home star? Have you ever wondered what its size is? Did you know that it has no solid surface? And what about solar wind — is it really wind? Stay with us to learn the answers to these questions and read many more amazing facts about the Sun.

Evolution of the Sun

It may sound incredible, but the Sun has been burning for approximately 4.6 billion years. It was born along with the Solar System from the solar nebula — a huge rotating cloud consisting of dust and gas. This is how it happened: the overwhelming gravity made the solar nebula flatten to a disk, the majority of dust and gases being concentrated in the center to form the Sun. 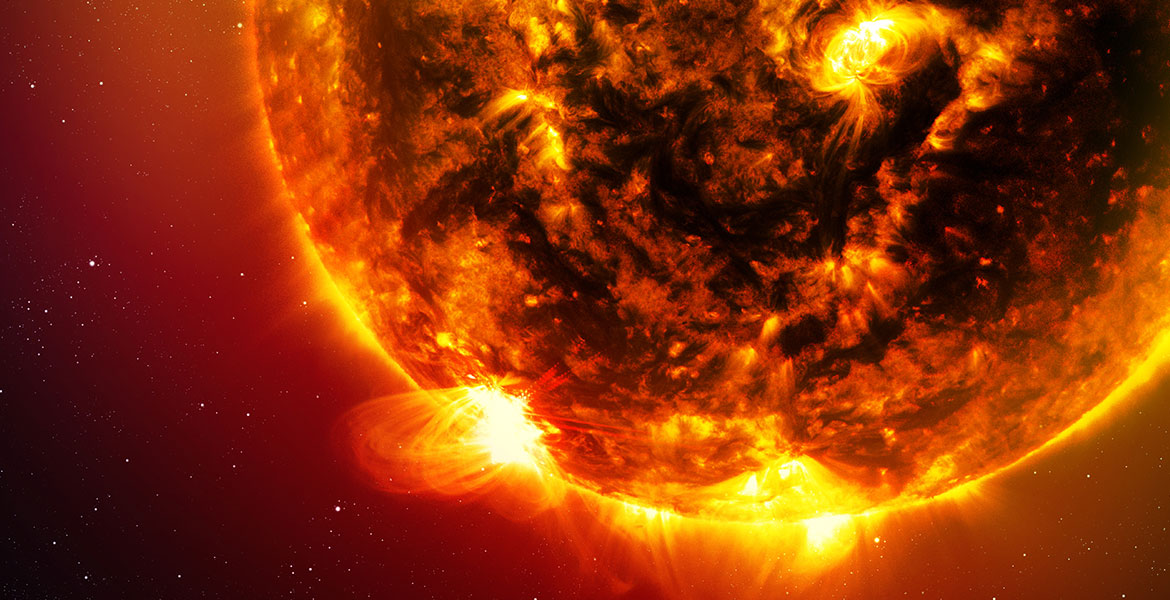 The Sun is roughly half-way through its lifespan. At present, it is a yellow dwarf, a medium-size type of star that's fairly common in our galaxy. Scientists believe that in about 5 billion years from now, our home star will start the red giant phase. It means that the Sun will swell up and consume the closest planets, possibly including Earth. However, afterwards it will shrink back to become a tiny white dwarf.

The Sun is very close to a perfect sphere: in fact, there is just a ten-kilometer deviation between the Sun’s polar and equatorial diameters. In contrast to Earth, the Sun has no hard surface. So what does the Sun consist of? Get this: all stars are huge bodies made of gases, the Sun being not an exception. To be more precise, our home star is composed primarily of hydrogen (73.46%) and helium (24.85%). Other components include carbon, oxygen, iron, neon, silicon, nitrogen, and sulphur. 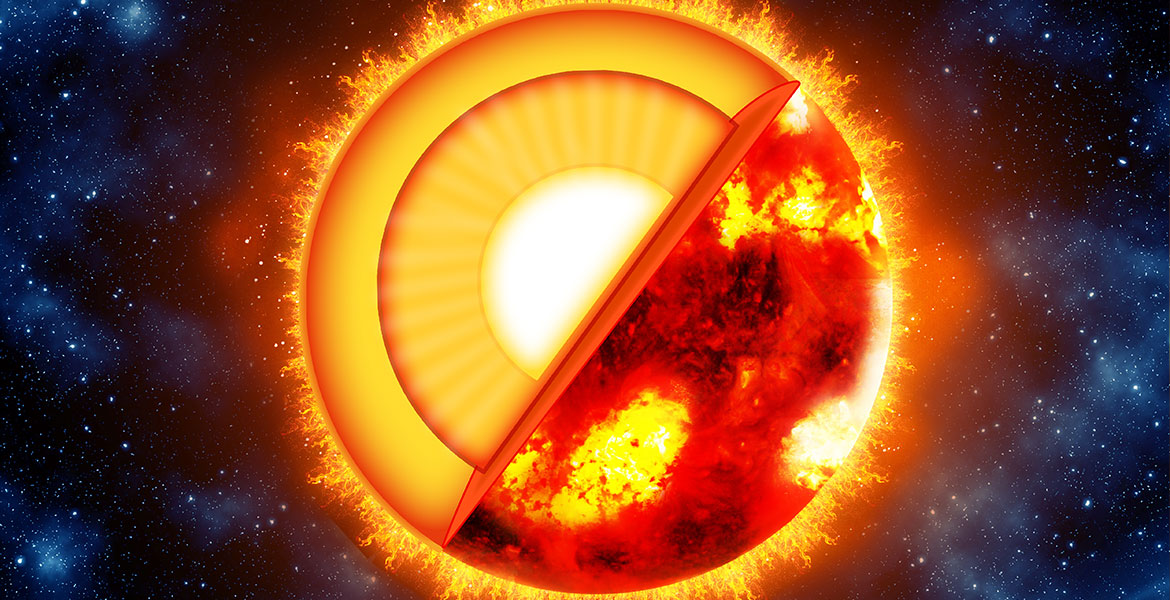 The Sun’s surface temperature is close to 5,500 degrees Celsius, and it is astonishing 15.5 million Celsius at its core.

The energy we need so much is generated deep in the core, where nuclear fusion transforms hydrogen to helium. Then, particles of light called photons deliver this energy to the Sun's surface, the photosphere. Solar photons get to Earth in around eight minutes after they've been emitted from the sun's interior, traveling an average of 150 million kilometers. Can you imagine that?

We don’t want to overwhelm you with terms, but you might have heard of the Sun’s corona, haven’t you? Well, to start off, out beyond the solar photosphere there is the atmosphere that consists of two parts. The lower part is called chromosphere, and the upper part is known as the solar corona, which extends thousands of kilometers above the Sun’s surface into space. The chromosphere and corona also produce visible light, however, we can only see it during a total solar eclipse, when the moon passes between our planet and the Sun.

Here are even more thrilling things about the Sun. Did you know that about 1.3 million Earth-sized planets could fit inside the Sun? Fair enough, as the Sun has a diameter of nearly 1.39 million kilometers. Just imagine: this is more than a hundred times greater than the diameter of Earth, and the Sun’s mass equals the mass of Earth multiplied by 333,000. Enormous, right? It might sound unbelievable, however, the Sun accounts for about 99.86% of the mass of the entire Solar System. Still, it is not that huge if compared to other stars. For instance, the biggest star we know could almost reach Saturn if it were placed instead of the Sun. 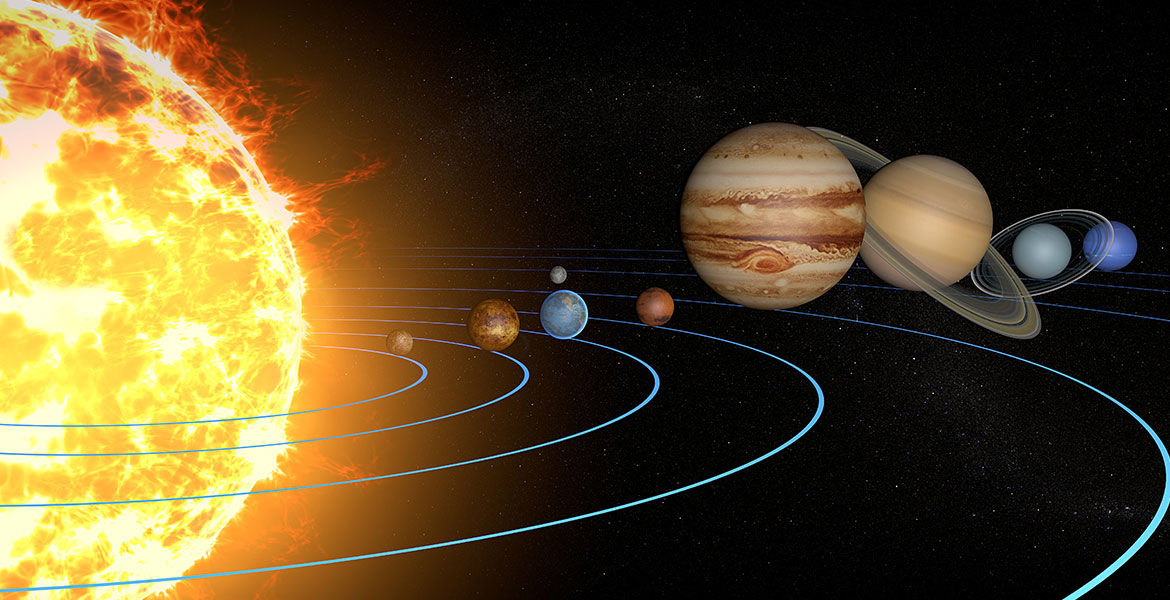 How far away is our home star? According to scientific data, it remains at an average distance of 150 million kilometers away from our planet, 391 times further away than the moon. Why average? It’s because the distance between Earth and the Sun varies since our planet moves around the star in an elliptical orbit, which by the way explains changing of the seasons on a greater part of Earth.

The Solar System is located in the Milky Way galaxy, the Sun being mind-blowing 30,000 light years away from its centre. The Sun rotates as it orbits the Milky Way’s center. By the way, it spins in the opposite direction to Earth. Because it’s made up of gases, different parts of the Sun rotate at different speeds: once in 25 days at the equator and once in 35 days at the poles.

Although the Solar System is moving at an average speed of 720,000 km per hour, it takes 230 million years to travel around the center of our galaxy, so the Sun has circled the Milky Way only 18 times over its lifetime. 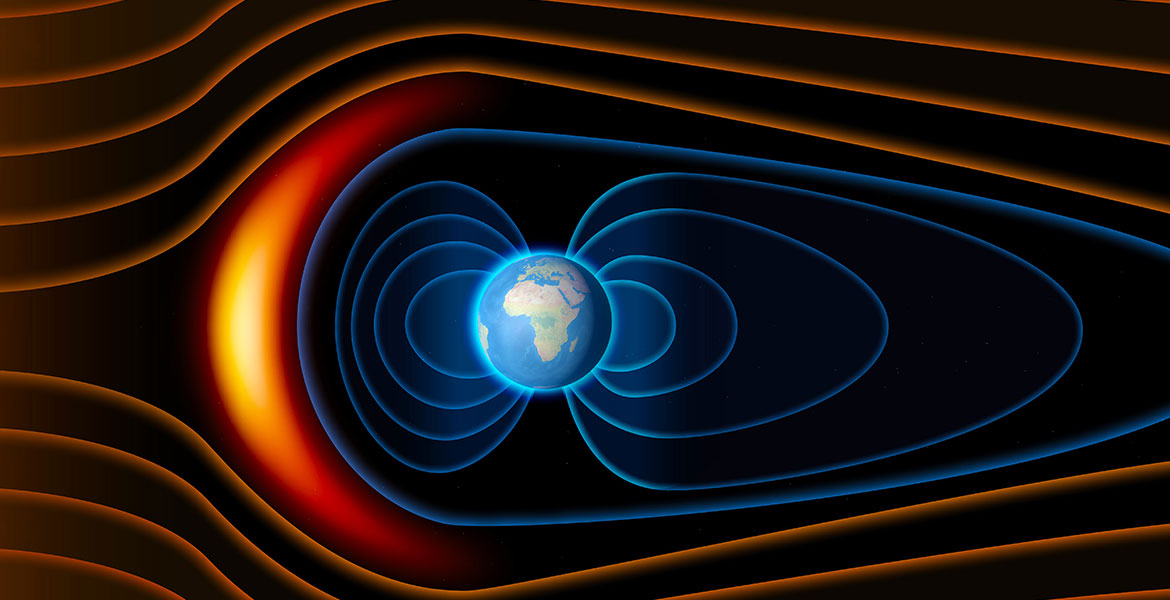 Some quick cool facts about the Sun