Do you love watching bright stars in the night sky? Located hundreds and thousands light years from Earth, they’ve been fascinating people with their sheer beauty for centuries.

Each season, a totally new picture of constellations is painted in the night sky. Of course, with the exception of those ones that are visible all year round and never sink below the horizon. These constellations are called circumpolar since they are located close to the celestial poles.

Crispy winter nights seem to be the best time for delighting in the amazing sky. In this guide, we’ll walk you through the most prominent winter constellations and give you the clues about how to spot them in the sky.

What Are Winter Constellations?

The Bears and a Dragon: Ursa Major, Ursa Minor and Draco 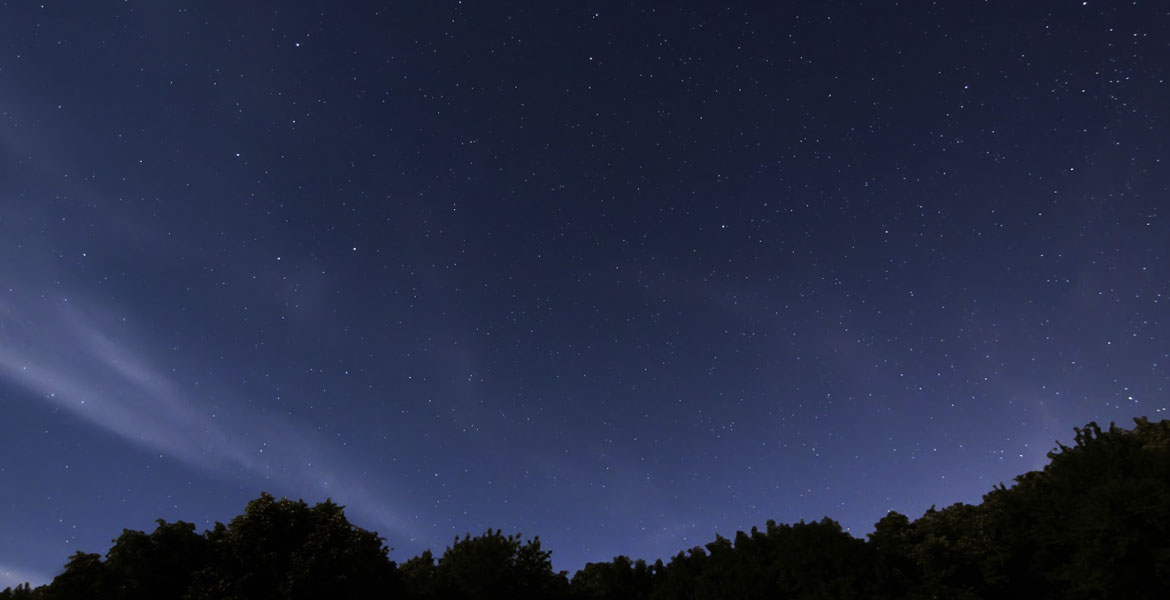 Let’s start with the three most famous circumpolar constellations: Ursa Major, Ursa Minor and Draco, which never hide from the observers in the Northern Hemisphere. Ursa Major, the Great Bear, is best known as the home of the Big Dipper asterism, which is considered to be most universally recognized. The Big Dipper consists of Ursa Major’s seven brightest stars and resembles a ladle. Alioth, one of the dots that form the handle of the ladle, is the brightest star of Ursa Major (81 light years from the Sun).

Found the dipper? Great! Now you can easily spot Ursa Minor. For this, look at the two stars that make up the outer edge of the bowl, known as pointer stars. Next, connect these two stars and draw an imaginary line above the bowl. Polaris, or the North Star, lies on this line, nearly five times the distance between the two pointers. Polaris is the brightest star of Ursa Minor, or Little Bear, which is home to another recognizable star pattern, the Little Dipper. The North Star marks the end of the Little Dipper handle.

Now, let’s locate Draco, one of the largest constellations. It’s easy to spot the tip of Draco's tail halfway between the dippers. 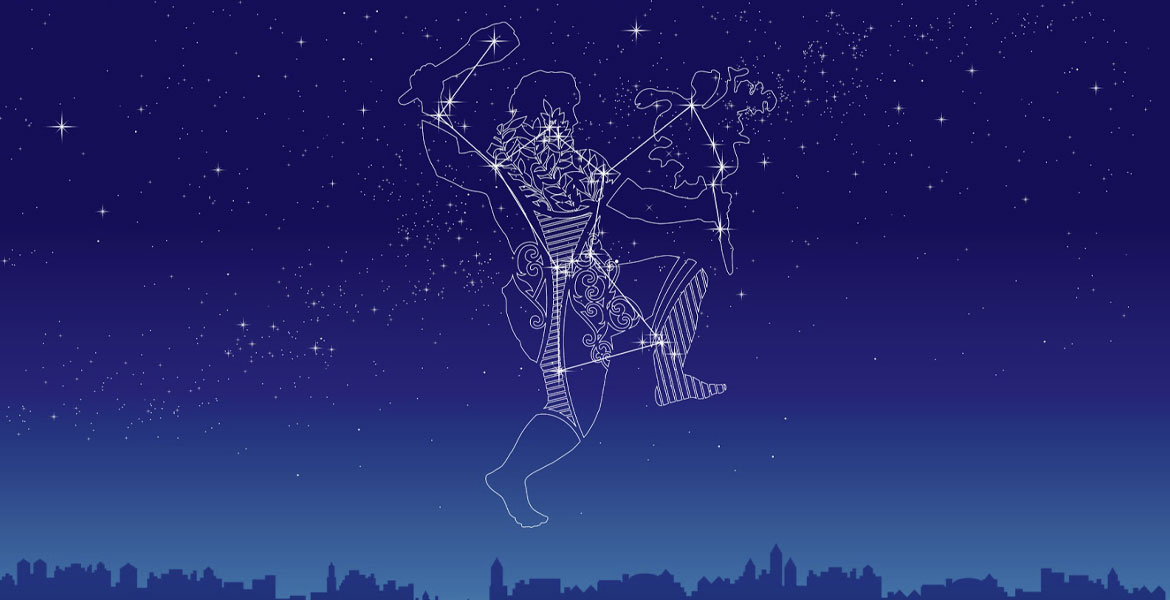 Orion the Hunter is a true gem of the winter night sky. It’s quite easy to identify Orion by Orion’s Belt, an asterism consisting of three bright stars in a short, straight line. Now, look for the bright, reddish star up and to the left of Orion’s belt. This is Betelgeuse, one of the most iconic and brightest stars in the night sky, which marks the hunter’s right shoulder (or left as we look at it). Together with Sirius and Procyon it makes up the Winter Triangle, an asterism formed by three brightest stars in the winter sky. Orion’s brightest star, Rigel, is located in the hunter’s leg and is the seventh brightest star in the sky. There’s one more interesting object in the Orion constellation. Find the hunter’s sword that hangs south of the belt, and you’ll see the spectacular Orion Nebula, visible to the naked eye although it is located more than a thousand light years from Earth.

Taurus: Look into the Bull's Eye 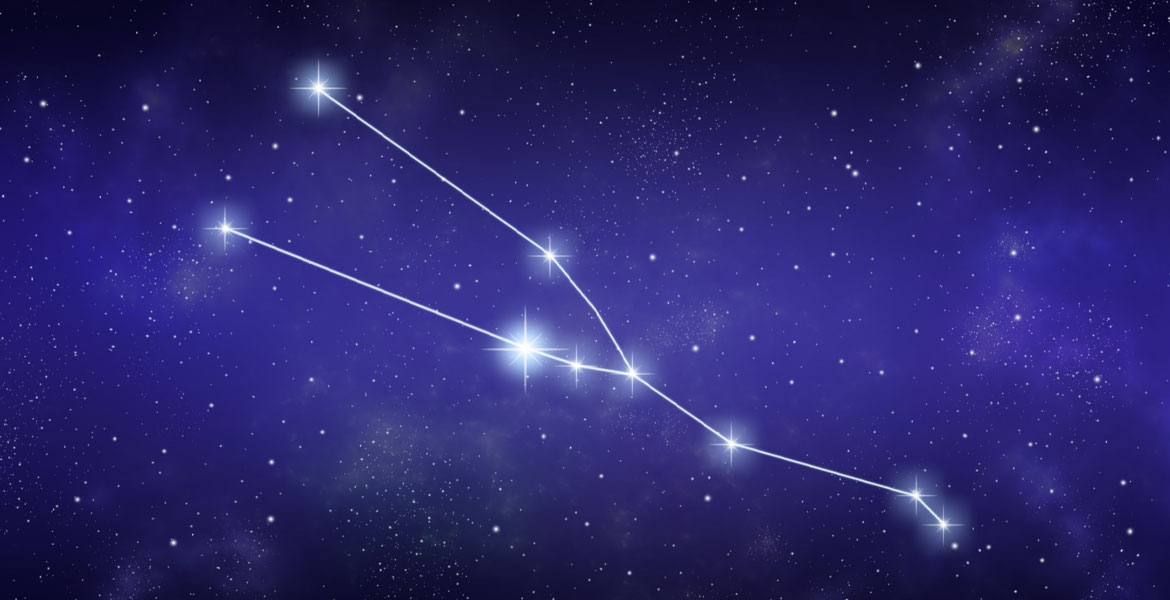 Taurus the Bull is another spectacular constellation in the night sky. Taurus is known for its brightest stars Aldebaran, Elnath, and Alcyone. The Bull is also home to the Pleiades, or Seven Sisters, a spectacular star cluster seen with the naked eye. Taurus looks like a V-shaped star pattern with long horns extending out across the night sky, which lies immediately north-west of Orion. Its brightest star, Aldebaran (65 light years away from the Sun), marks the eye of the Bull. 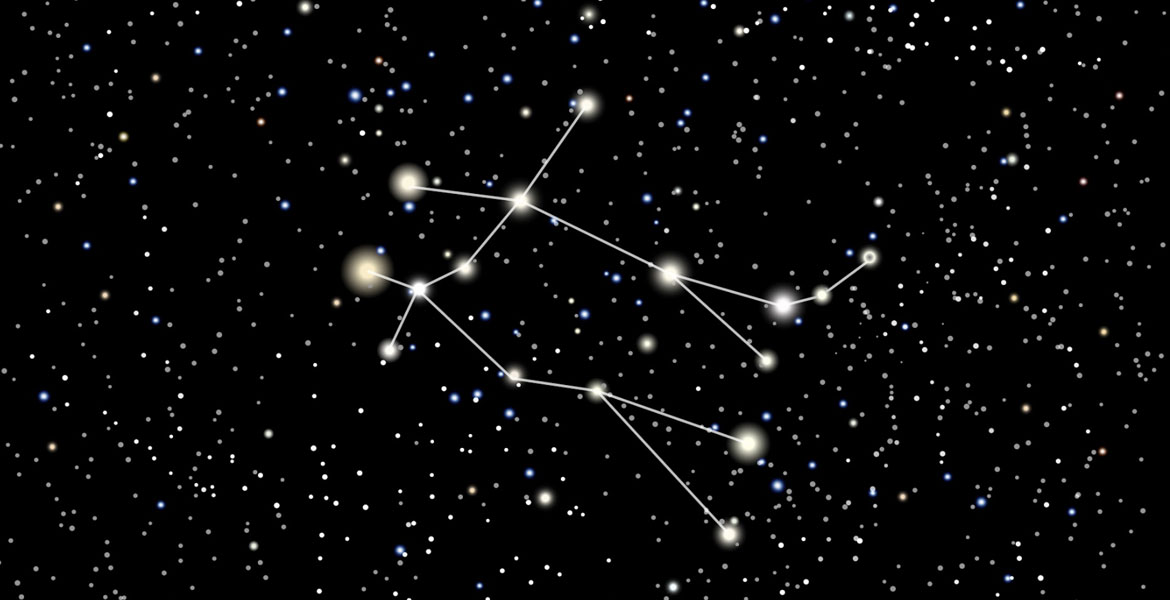 Gemini is one of the winter constellations that belong to Zodiac constellations. "Gemini" is the Latin word meaning "twins," and this constellation is typically depicted as a pair of twin boys. It looks like two long lines of stars extending down from its two brightest stars — Castor and Pollux, which represent the heads of the twins. The easiest way to spot Gemini in the night sky is to look for Castor and Pollux east of the V-shaped Hyades cluster, which makes up the face of Taurus. 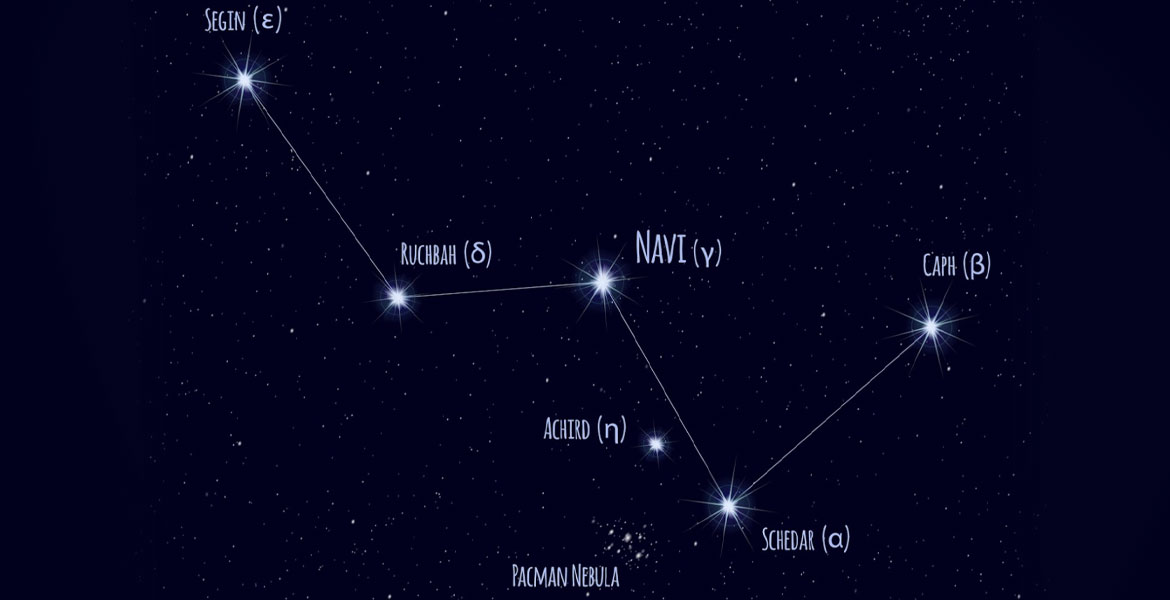 Cassiopeia is one of the most beautiful constellations in the sky that can be observed from the Northern Hemisphere throughout winter months. It got its name from Cassiopeia, the vain queen in Greek mythology. It’s quite easy to recognize Cassiopeia due to its prominent W asterism that is made up by the five bright stars. Schedar, the brightest star in Cassiopeia, is an orange giant located 228 light years from Earth. Like Ursa Major and Ursa Minor, Cassiopeia is a circumpolar constellation. You can find it by drawing an imaginary line from the North Star in the opposite direction than Ursa Major. 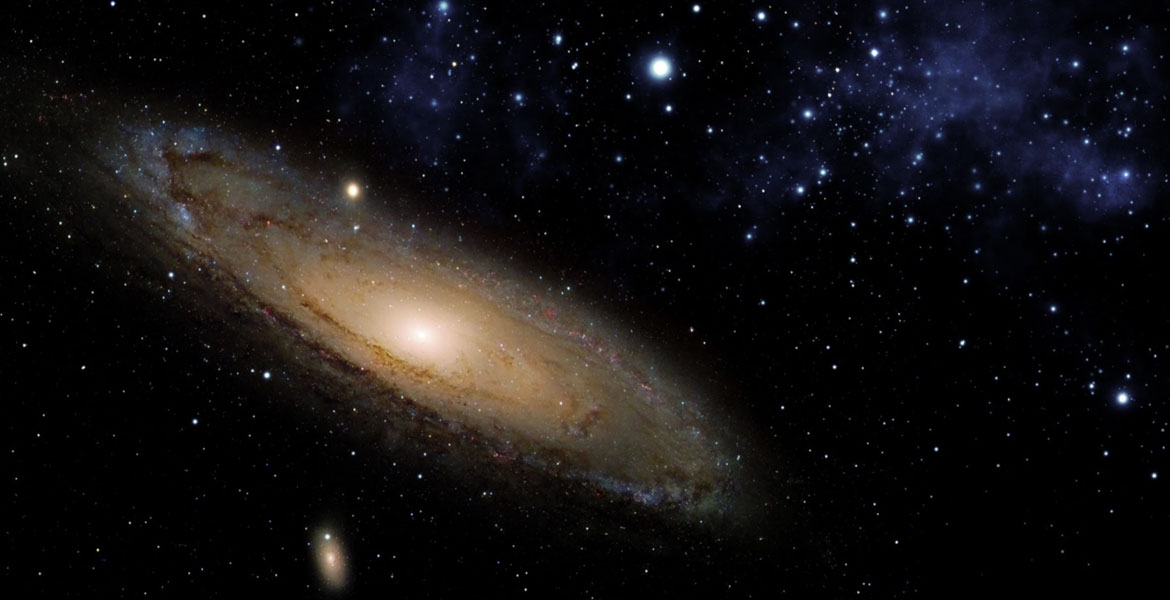 Andromeda is located directly next to Cassiopeia. Its brightest star, Alpheratz, has a magnitude of 2.1 and is located 97 light years away from us. Andromeda’s most notable feature is the fascinating Andromeda Galaxy, one of the closest galaxies to Earth and one of the few galaxies that are visible to the naked eye. According to an ancient Greek myth, Andromeda is the princess of Ethiopia who was saved by Perseus from sacrifice to the sea monster Cetus. 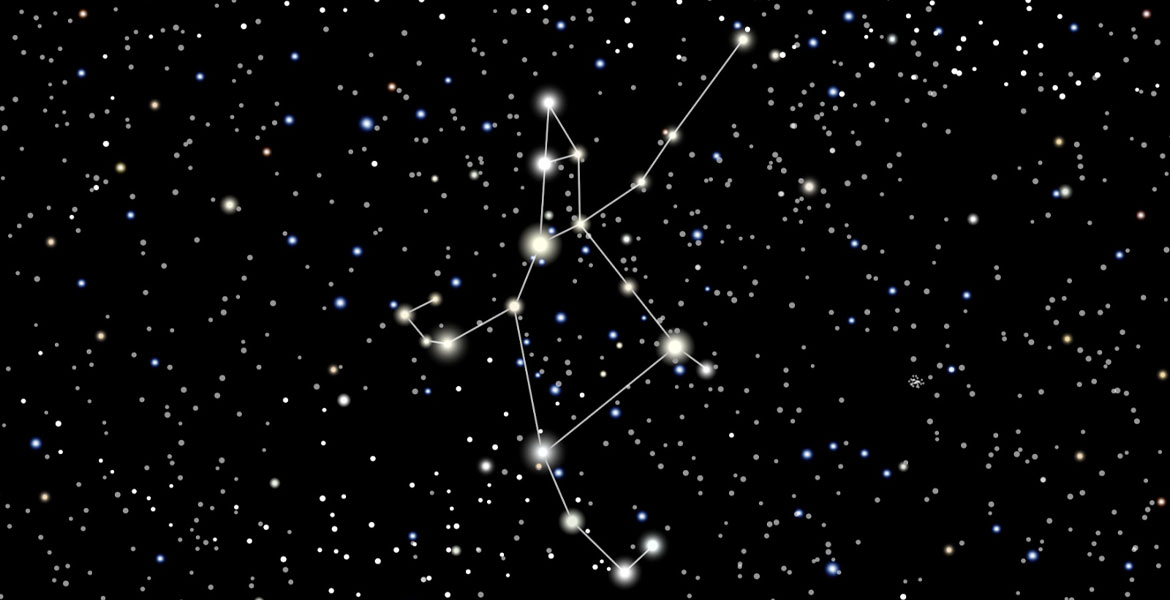 Although Perseus the Hero is not as bright and easy to identify as some of the other constellations, it lies next to Cassiopeia which makes it simple to locate in the night sky. To find Perseus, look for Cassiopeia (a bright "W" or "M" (depending on its orientation). If Cassiopeia appears to you as a "W," Perseus will be the star pattern below the left part of the zig-zag. Or, if Cassiopeia resembles an "M," Perseus will be the constellation below its right part. Found it? Way to go! Now, look for Perseus’ two exceptionally bright stars. Its brightest star is Mirfak located at the midpoint of the constellation. The second brightest star is Algol, the one forming a line with Mirfak to mark the middle of Perseus. 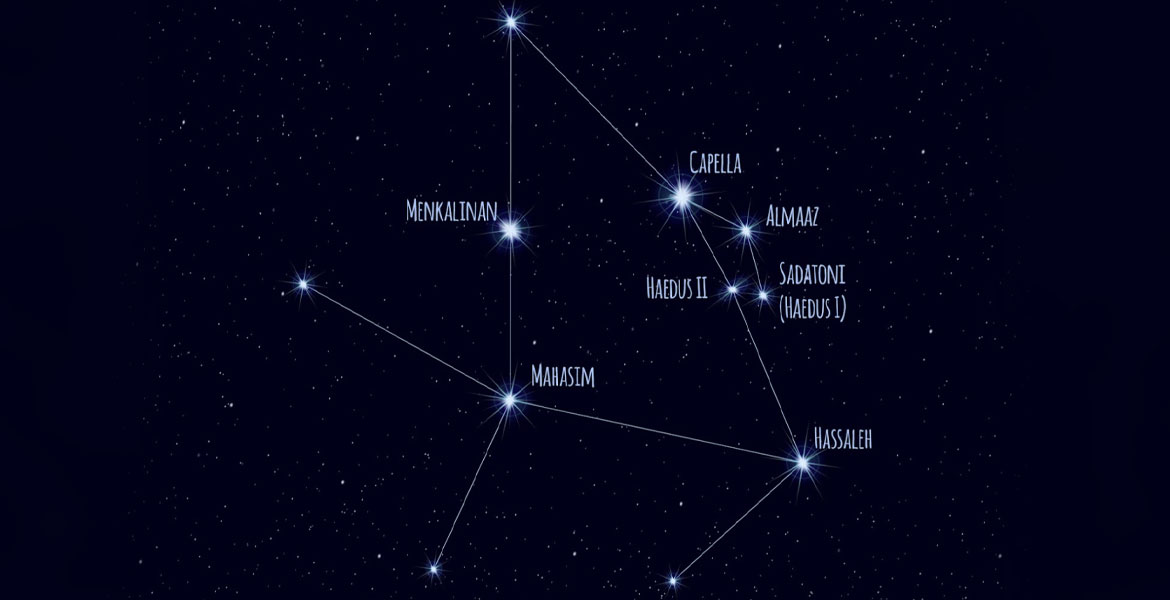 Auriga can be spotted with the help of the easily recognizable Orion as a guide. The two constellations appear in the west-northwest sky a couple of hours after the sunset. You can also see a pentagon shape of stars right above Taurus, one of which is Capella, Auriga’s brightest star, which is a very unusual multiple star system located quite close to us (just 42.9 light years away), and the sixth brightest star in the sky.

If you are a beginner in locating constellations, winter is undoubtedly the best time to improve your skills. For better results, you can use a winter star map to locate constellations in the sky. Great Bear, Princess and Hunter are waiting for you. Look for a comprehensible winter constellation map and find your favourite star in the sky.